Jerry Hall has revealed that she and all four of her children with Sir Mick Jagger suffer from dyslexia.Miss Hall, 50, said that the family see the condition as a gift since „it makes you think differently“.
The former model, who was married to the Rolling Stone for nine years, said yesterday that their children Elizabeth, 23, James, 22, Georgia May, 15, and nine-year-old Gabriel all suffer from the learning difficulty. 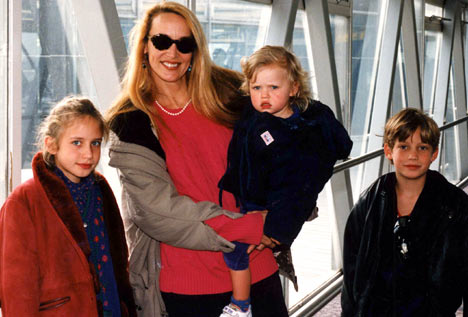 „They take after me,“ she added. „Being dyslexic is very difficult in the beginning, but as you get older you learn to cope with it and I think it’s great. It’s like a gift because it makes you think differently.“
Miss Hall said that she spends two hours every day driving Gabriel to a special school that caters for dyslexic children.
„It’s a slog, but it’s worth it,“ she said. „And it really helps him when I read to him. I love family life and my children are the greatest gift life has given me.“
James, a budding musician who recently trained to be an actor in New York, attended Stowe School in Buckinghamshire rather than Eton because of its reputation for helping dyslexic children.
Up to ten per cent of children are believed to have some kind of dyslexia.
For many years sceptics insisted the condition – which impairs a person’s ability to read – existed only in the minds of anxious parents.
But a succession of studies has revealed that dyslexia can be inherited. Therefore, several members of one family being affected is not uncommon.
All four young Jaggers still live at Miss Hall and Sir Mick’s former marital home on Richmond Hill in Surrey, and the former model admitted: „Maybe I am going to be one of those mothers who has all the children with her in their 30s.“
While the Stones continue to be the world’s highest-earning band, Miss Hall has been forced to find work as the new „face“ of Flash detergent. She said recently that she still dates regularly, but she told Closer magazine: „I am so busy – I don’t want to get married. I live with my children and I don’t think it would be right.“
Researchers recently discovered a gene which could trigger dyslexia in some children. The breakthrough reinforced earlier research showing that the condition could be inherited.
The latest findings traced a gene called DYXC1, which is disrupted in dyslexic families. It produces a unique protein which could affect brain activity.
LINK